US president Mr. Donald Trump says that there is no need to haste the process of denuclearization from North Korea. This is all due to Kim and Trump summit, that is going very well said, Mr. Trump. He says there is no ‘time limit’ for North Korea to disarm its nuclear weapons. They can take their time as they wish.

Well, it’s an old thing. The new story is reversed because Donald Trump has changed his statement regarding nuclear demobilization of North Korea.

He had an effective talk with Mr. Kim Jong-un North Korean leader on 12th of June. After this meeting, things have been changed a lot. Behavior and perception of Trump regarding North Korea have totally changed.

Well, talking about the other side. North Korea showed a very negative response to America’s hasty nature about denuclearization. For them, it was a kind of “gangster-like” behavior. They said the US is making gangster like demands. They called this tone and attitude of America “extremely troubling”.

“On the other hand, Trump said that things with Pyongyang are going great.” 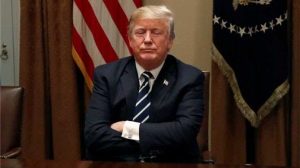 He talked to US reporters. “We have no time limit. We have no speed limit,” “The sanctions are remaining. The hostages are back. There have been no tests. There have been no rockets going up for a period of nine months, and I think the relationships are very good, so we’ll see how that goes.”

“President Putin is going to be involved in the sense that he is with us,”

Before Kim-Trump summit, Trump wanted to initiate the process of denuclearization as soon as possible. He said demobilization of nuclear weapons must begin within the shortest notice of time. Precisely, he used the term “very quick” for it.

But after their meeting on 12 June, he said he is not burdening North Korea with any time limit. There is no need to hurry the process. He said.

After the summit, Mr. Trump said that North Korean’s demobilization of nuclear weapons may take some time.

Talking about negotiation with Pyongyang at a press conference in the UK he said.

Talks with Pyongyang is “probably a longer process than anybody would like”.

Trumps this behavior is quite optimistic. On the other hand, Mr. Kim is also quite happy with this negotiation. He sent American president a letter in which a positive response was described regarding their meeting and also how their relationship is getting better with America.

On being questioned about North Korean nuclear demobilization. US Secretary of State Mike Pompeo told that he hopes that “major disarmament” will occur till 2020 from North Korea. Let’s hope for the best!

4 Reasons Why You Need 3D Visual Configurator for Furniture

Life-Saving Stun Gun For You